In the summer of 2013 I found myself on a battlefield tour of Sicily. I was there with a group of touring scholars organized by The Gregg Centre for the Study of War and Society. Seventy years earlier the island was the site of a relatively overlooked Second World War battle. We visited the battlegrounds of American, British, and Canadian engagements against German and Italian defenders. I was in the midst of research for my master’s thesis, having visited archives in the United Kingdom on my way to the island. 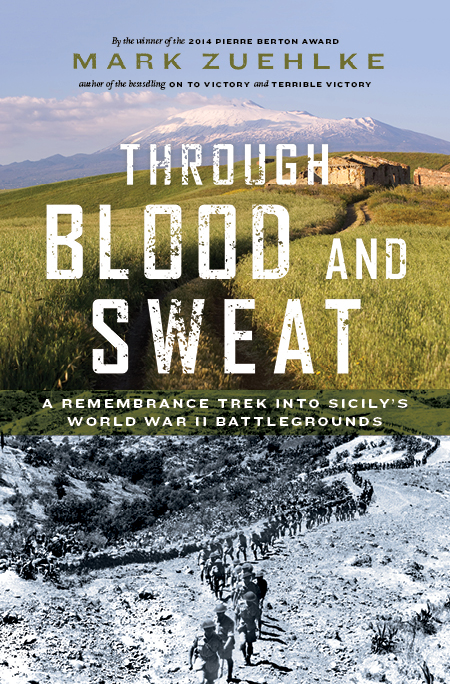 A second group of Canadians was visiting the island. This group was Operation Husky 2013: The 70th Anniversary Citizens Memorial Campaign. A small but devoted contingent of Canadians led by businessman Steve Gregory marched the approximate route taken by 1st Canadian Infantry Division in 1943, stopping at towns along the way for remembrance ceremonies involving local officials and Sicilians. Mark Zuehlke, Canada’s leading popular military historian, recounts the journey in his most recent book, Through Blood and Sweat: A Remembrance Trek across Sicily’s World War II Battlegrounds.

As someone who was in Sicily at the time but was not at many of the marcher’s ceremonies, I was keenly interested in Zuehlke’s recounting of these moments. Veteran Sherry Atkinson emerges as the book’s – and indeed the memorial campaign’s – highlight in these ceremonies. In Modica, a small Sicilian town that Lieutenant Atkinson helped liberate in 1943, he recalls how he and his fellow soldiers were so moved by the sight of starving children that they gave away all of their rations. Sherry’s war was mercifully short. A couple of weeks later he was wounded outside of Nicosia by shrapnel from an artillery shell. In 2013 he tells the locals, “My blood has been shed upon your earth, and I consider myself one of you.” Sherry’s message throughout the memorial campaign is that remembrance is not about glorifying war, but about hoping that war never happens again.

Another great moment shared by Zuehlke is the effort to capture a piece of history in the present. His group recreated a photo of the Seaforth Highlanders of Canada moving up to hear General Montgomery speak in 1943. This is the photo on the bottom half of the book’s cover. My tour group recreated our own historical image. We visited Troina, the site of the heaviest fighting American troops encountered on the island. The town is full of historical posters featuring images of the town and its occupants in 1943. These inspired us to capture our own photograph. We chose one of Robert Capa’s famous images of American troops resting near the entrance to the Cathedral of Our Lady of the Assumption in the battle’s aftermath. 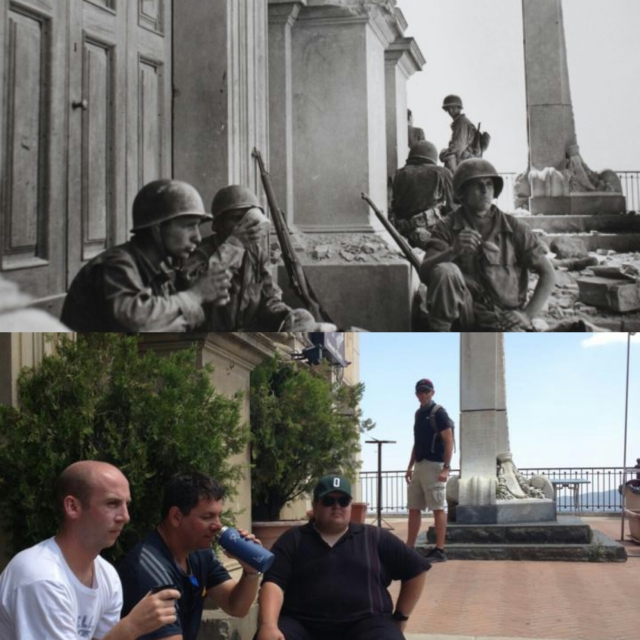 Markers honouring the fallen along the marchers’ route were another part of the memorial campaign. The exercise was primarily meant to honour the Canadian Army’s losses across the island. I sponsored a marker and, having researched the airman’s fate, sent the campaign an email noting that he and his crew were killed when their Wellington bomber was shot down and crashed in the mountains north of Messina. I was disappointed when my advice for where to place his marker went unheeded, but acknowledged the difficulties of fitting the air campaign into the route. The marchers’ path can be generally said to mark where soldiers fell, but the reality is not so simple for airmen. Canadian airmen lost their lives across the central Mediterranean in support of Operation HUSKY. Their names are on memorials all over the Mediterranean – from the Agira Canadian War Cemetery to the Malta Memorial for airmen who have no known grave. I’d be interested to know Zuehlke’s reflections on this point as he seems to have initially been skeptical of the marker concept. 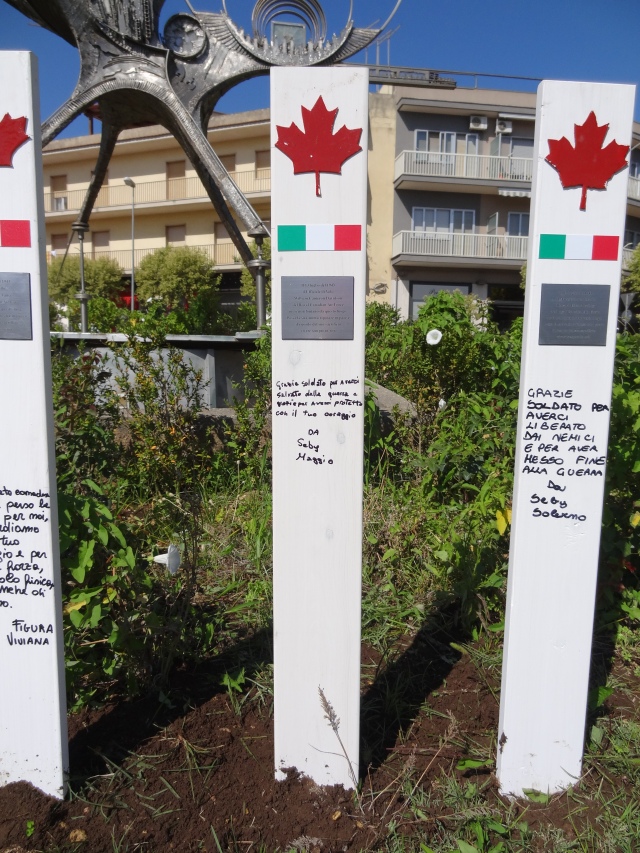 Missing from the book is a reflection on what Sicily meant in respect to the larger war. Zuehlke makes this connection in his previous work, Operation Husky, but not here. This is a shame, because it needs to be remembered too. It is not enough to say that lives were lost in the fight for the peace, liberty, and freedom of Canadians and Sicilians alike. True enough, but how was that fight being waged, and where did Sicily fit inside that strategy?

The book is an excellent remembrance reflection. It is not often that an historian takes the time to reflect on the battle he or she studies in the manner Zuehlke has. Through Blood and Sweat will make an engaging primary source for future war and memory researchers for many years to come.

One thought on “Through Blood and Sweat, a Book Review”