Political Scientist Robert A. Pape published Bombing to Win in 1996.[1] In that work, Pape argued that air power is of limited effectiveness when attacking purely strategic targets such as the enemy’s morale, leadership, or communications. Instead, the most effective use of air power is alongside ground forces in a ‘hammer and anvil’ approach.

The air force acts as the hammer while the field force serves as the anvil. Theoretically, any army confronted by an air force with air superiority and an opposing army is in a predicament. The commander can choose to concentrate his forces, leaving them open to the hammer – tactical air power. Alternatively, he can disperse his troops, at which point the anvil – the opposing army – can isolate and destroy these smaller units in a piecemeal fashion.[2] This is what makes air superiority so tantalising in modern warfare. It forces one side into a catch-22. The fundamental principle is that air superiority denies the opposing force freedom of movement. It does not always work out as cleanly as the hammer and anvil concept suggests (and as the below examples illustrate), but removing the opposing force’s freedom of movement is a sure way to win a battle or, perhaps, a war.

The Allies caught the Axis armies in a hammer and anvil catch-22 in Sicily in 1943. The successful Allied landings in Operation HUSKY and the ensuring air battles won the Allies air superiority over the island. Heavy losses in the invasion’s first days and the threat the well-positioned landings posed to their airfields forced the German and Italian air forces to withdraw from the island days into the battle. Field Marshal Albert Kesselring had to rely on ground troops to hold the island and keep Italy in the war as long as possible. To achieve their aim, the Allies needed to secure the island and use it as an advanced staging ground to force Italy from the war.

Some of the heaviest fighting occurred in the island’s centre, on the inland hinge of the Etna Line. Kesselring hoped to hold the Allies at bay using a mountainous ring around Sicily’s active volcano, Mount Etna. 1st Canadian Division, undergoing its baptism of fire in this war, drew the task of punching a hole in the Axis line alongside their counterparts in 1st US Division, the Big Red One. 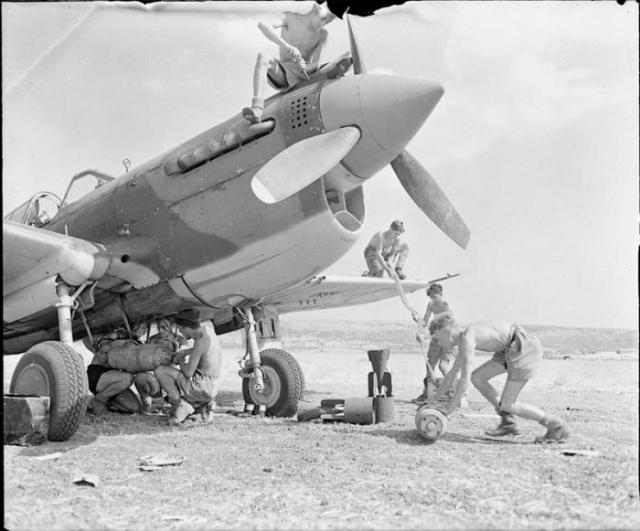 Armourers load a Curtiss Kittyhawk Mark III of No. 239 Wing RAF with 250-lb GP bombs and re-arm the machine guns in the wings, at Agnone, Sicily, for a forthcoming sortie against enemy positions in the foothills of Mount Etna. (Source: © IWM (CNA 1134))

As the Americans engaged in heavy fighting near Troina to the north, the Canadians advanced on Regalbuto to the south. In this attack, the Canadians leant heavily on artillery and air support. Air power was to focus primarily on reaching beyond the range of artillery where Allied intelligence expected much enemy traffic movement:

[i]t was believed that the enemy would withdraw when the assault developed, and it was hoped that the air attack would pin him down to the ground and prevent this operation.[3]

Allied intelligence also believed that the Germans were using the town as a motor pool for their vehicles and guns.

The Canadian anvil struck as the hammer waited overhead. Kittyhawk fighter-bombers claimed over 40 enemy motor vehicles destroyed on 2 August between Regalbuto and Adrano.[4] Between the fighting in and around Regalbuto and losses sustained during their withdrawal on Highway 121, the Hermann Göring Division’s panzer engineer battalion was effectively ‘eliminated as a combat force.’[5] The Allies successfully flushed the Germans from their positions after a gruelling attritional struggle. They forced the Germans to use the roads in large numbers, increasing already heavy casualties.

A German Mk III tank knocked out during the fierce street fighting in Centuripe during the drive on Messina. (Source: © IWM (NA 5389))

A similar situation developed in the Battle of Troina. This time, however, the Germans made a much longer stand. Between 31 July and 6 August 1943, 15th Panzer Grenadier Division lost 1,600 men; 10 percent of the division’s strength or 40 percent of the fighting troops. The German commander, General Eberhard Rodt, later noted that losses from heavy artillery fire and massive carpet bombings on the hills and firing positions around the town were very high.[6] Allied aircraft caught a large amount of Axis motor transport on Highway 120 between Troina and Randazzo. Fighter-bombers claimed 50 vehicles strafed and bombed near Cesaro on 2 August.[7] It is possible that this was a reinforcement or supply column for the Troina garrison. Finally, Rodt notes that while his men were able to break contact with the Americans, they were often attacked and suffered losses from low-level aircraft while moving from Troina towards Bronte and Randazzo. Again, the Allies forced an Axis withdrawal to occur in daylight, adding to losses from the earlier attritional struggle.[8]

The German Army was just starting to get used to fighting with minimal support from the Luftwaffe. Air superiority over Sicily enabled the Allies to make use of this hammer and anvil to significant effect. Although elements of four German divisions escaped across the Strait of Messina in mid-August, those units were hollow shells of their former selves.[9] Air power and the catch-22 Allied air superiority forced the Axis into played a significant role in this outcome. The loss of Sicily opened the Mediterranean to Allied shipping, supported the Russians on the Eastern Front, and drove Italy ever closer to surrender. 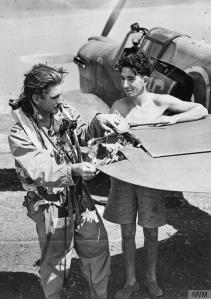 Flying Officer Colin Edmends from Australia and his fitter, D. McMinnemy, inspect the tail of his Curtiss Kittyhawk after it was damaged during a sortie over Catania. (Source: © IWM (CNA 1139))

Robert Pape’s writing on air power remains fairly controversial. Other air power theorists argue that the opposing force’s command and control, specifically regarding leadership and communications, are ideal targets. Foremost among these advocates is Colonel (Ret.) John Warden III, who wrote The Air Campaign, while he was at the National War College in the mid-1980s. However, in the estimation of this author, due to the case study examined above, Pape’s hammer and anvil approach has merit. As Philips Payson O’Brien notes in How the War Was Won, ‘except for killing every one of the combatants fighting against you, the only way to “win” a war is to stop your enemy from moving.’[10] Both theories advocate a solution to this problem. The difference is that one gives air power a complimentary role while the other affords it the leading role. In the Second World War, the debate was between the theatre air power school and the victory through air power school. The RAF and USAAF each had advocates for both of these approaches. This debate continues to this day.

This post first appeared at From Balloons to Drones.

[3] Directorate of History and Heritage [DHH], Canadian Military Headquarters [CMHQ] Report No. 135, ‘Canadian Operations in Sicily, Part II Section 2, The Pursuit of the Germans from Vizzini to Adrano, 15 July to 6 August,’ p. 92.