On the recent weekend of 23 and 24 August the Greater Moncton International Airport was host to the 2014 Atlantic Canada International Air Show. My significant other and I were able to attend to enjoy sunny skies and aviation feats. I’ve compiled a number of her best photos below (my best photos are of stationary archival documents) along with some context and storytelling.

One camera photographs another.

We arrived at the show early in order to take in some of the static aircraft displays. The first aircraft we examined was the Lockheed CP-140 Aurora of 405 Long Range Patrol Squadron of 14 Wing based at Greenwood, Nova Scotia. It was nice to learn about and tour the inside of the aircraft (I even got to see its powerful optics in action as one of the crew members coached guests on the use of the aircraft’s nose-mounted camera). Even more interesting was the squadron lineage. 405’s motto is the Latin term ‘Ducimus’ which translates ‘we lead.’ 405 was the first Royal Canadian Air Force (RCAF) bomber squadron deployed overseas to the United Kingdom during the Second World War. It was also the only squadron from 6 Group (the Canadian formation in Bomber Command) to serve in 8 Group, Bomber Command’s pathfinder force. These units sortied ahead of the bomber stream to mark targets for the larger bombing force. The squadron’s badge faces to the right instead of the left, illustrating the unit’s leading role. 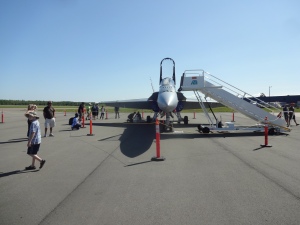 Our next stop was the McDonnell Douglas CF-188 Hornet. This aircraft belongs to 425 ‘Alouette’ Tactical Fighter Squadron of 3 Wing in Bagotville, Quebec. Crews from 425 are presently deployed to eastern Europe as Canada’s contribution to NATO’s response to the crisis in Ukraine. They also deployed to Italy during the international military intervention in Libya in 2011. The Hornets and their crews were actually based in Trapani, Sicily. Trapani was the site of a major Axis airfield during the Second World War. In 1943 425 squadron flew night bombing missions against Axis targets in Sicily and Italy, Trapani’s airfield being one such target. Thus nearly 70 years later the same squadron was flying missions in the opposite direction (it had been based in Tunisia in 1943). I had hoped to discuss this interesting fact with the aircraft’s pilot (to determine if he or she had been part of this mission in support of United Nations Security Council Resolution 1973) but we had to move on before he returned to the aircraft. 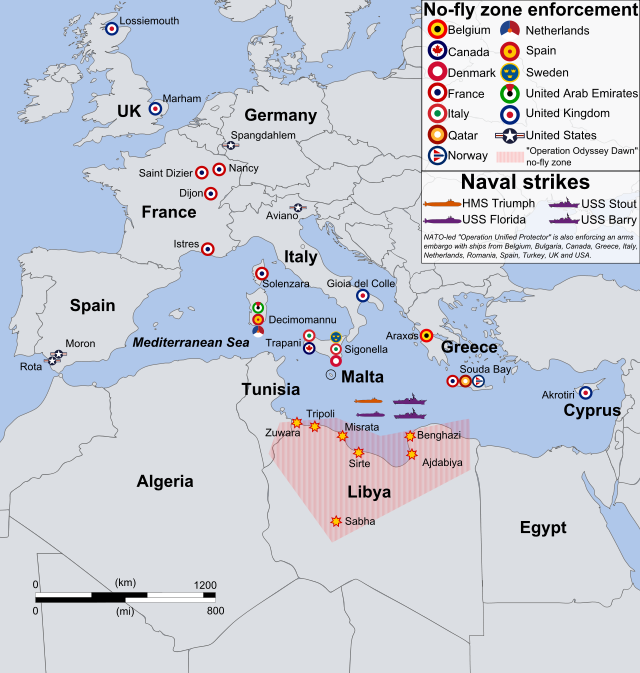 My significant other posing with a gentleman dressed as a corporal in the West Nova Scotia Regiment, 1st Canadian Division, Italy, WWII. Notice the Canadian Women’s Army Corps (CWAC) uniform in the background.

Talking with the “German.” He is actually a veteran of the Cold War-era Canadian Air Force. As you can see, the chat was quite animated.

Before the show started I ran into a number of folks dressed in Second World War-era garb displaying a collection of reproduction and original artifacts from the time. Represented was a corporal of Canada’s own West Nova Scotia Regiment, an American soldier of 3rd Infantry Division, and a member of the German Army in Eastern Front attire among others.  I had an excellent conversation with the “German” on topics ranging from grand strategy in the Second World War to Canadian military contributions throughout the ages (my better half was snapping photographs while I indulged). It turns out that these folks are part of the Atlantic Canadian Military History Association. Their hobby is a little too expensive for my tastes (collecting and wearing WWII-era uniform reproductions and equipment) but I must say that I was impressed with their dedication to an important raison d’être: “to preserve and honour the memory of the people who lived through the epic struggles of the Great War, World War 2 and Korea, and to educate the public about the many contributions of Canadians. This mission is accomplished through the authentic portrayal of the soldiers, sailors, air force personnel, as well as the civilians of all nations of the times.”  See http://tacww2lha.weebly.com/ for more information.

There were a number of standout moments from the air show itself. I’ll take the time to outline my favourite. The Skyhawks, or the Canadian Armed Forces Parachute Team, are a familiar sight at Canadian air shows, often opening the shows with a display involving a large Canadian flag being parachuted to earth along with one of the team members during the national anthem. This occurred as usual, but of particular interest to me was the parachute canopy one of the Skyhawks was using to assure his safe return to earth. His canopy was decorated with the flag of the Princess Patricia’s Canadian Light Infantry, a storied regiment that was formed on the outbreak of the First World War in August 1914 and remains one of three Canadian Army regiments in regular service today. Other forms of commemoration for the PPCLI’s centenary are underway. See http://www.ppcli.com/ for details.

There were a number of other great sights at the air show, but I’ll refrain from going into too much more detail here. I’ve included some extra photographs and captions in the gallery below. Enjoy!

The RCAF Air Demonstration CH-124 Sea King with a pair of crew enjoying the show from what seems an excellent vantage point.

Formation flying. What 431 Air Demonstration Squadron, the ‘Snowbirds,’ does best.