For the grand opening of my blog I’ve decided to do a piece relating to my MA thesis: “Eagles over Husky: The Allied Air Forces and the Sicilian Campaign, 14 May to 17 August 1943.” It is an operational history – that is, it focuses on the combat formations involved in the battle – and there was little room for personal stories. I hope to correct this through further research which I will share with my followers on this blog. Thanks for reading!

Operation Husky, the Allied invasion of Sicily in July 1943, is one of the lesser-known Second World War battles. Much of the literature on the campaign would have you believe that it is infamous for the failure of the Allied navies and air forces to close the Messina Strait and prevent the evacuation of Axis troops. An important counter narrative needs to be considered. The invasion was part of a grander Allied strategic effort to knock Fascist Italy out of the war, thereby denying Nazi Germany its most important ally. It was hoped that Italy’s fall would force the Germans to defend the southern coast of Europe, thereby tying down significant resources that could have been used on the Eastern or Western Fronts (in 1943 this is largely an air war over Germany, France, and the British Isles).

I do not want to bog anyone down with too much detail here, but in my estimation these strategic objectives were accomplished by Operation Husky, and the Allied Air Forces played a highly significant role in making this happen. One example of the efficacy of air power’s role is the attrition imposed upon Axis aircraft in summer 1943. According to Luftwaffe quartermaster general figures published in Williamson Murray’s Strategy for Defeat, German losses in the May to August period in the Mediterranean Theatre (1,600) matched those of each of the other major fronts. Indeed, the invasion of Sicily resulted in what Murray termed “the greatest air battle of the Mediterranean war” due to the high total (711) of German aircraft losses in July 1943. It is particularly interesting to note that these figures do not include losses incurred by the Regia Aeronautica, the Italian Air Force.

Axis daytime air resistance was described as broken on 15 July by a preliminary Air Headquarters Malta report on the operation. Both German records and the claims submitted to by Malta-based day fighters indicate that it became increasingly necessary to operate at night for Axis aircraft to avoid prohibitive losses. These raids, which targeted shipping and later the port facilities taken in the Allied advance, certainly resulted in Allied casualties but in the larger picture were simply meant as nuisance raids. Luftwaffe and Regia Aeronautica night bombers paid a heavy price for these incursions. Malta-based Beaufighter and Mosquito night fighter squadrons were well prepared to deal with this threat. These aircraft had short-range air interception (AI) radar installed and cooperated with ground-control interception (GCI) stations aboard ships and later ashore with the army in Sicily. A minimum of three of these aircraft would be kept on definite patrol lines throughout the night. Once directed onto an enemy aircraft by the GCI station, the night fighter’s navigator would assist the pilot in tracking the target using the AI radar. From 11 July to 11 August a total of 86 Axis aircraft were claimed destroyed by Malta-based night fighters for the loss of only three aircraft. 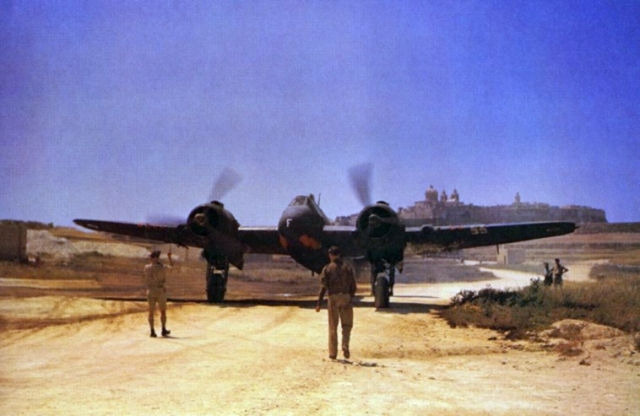 A pair of these successful aviators were then-Flying Officer John H. Turnbull and his observer, Sergeant Cyril F.J. Fowler of No. 600 Squadron Royal Air Force (Beaufighters). These airmen already had a pair of kills (one shared) to their credit before Operation Husky. On the night after the landings, 10/11 July 1943, they claimed a Junkers Ju 88 destroyed while on an interception patrol off southern Sicily. Four nights later they surpassed “ace” status by destroying three Ju 88s in succession. On 16/17 July and 8/9 August respectively, Turnbull and Fowler downed two pairs of enemy aircraft – a Heinkle He 111 and a Ju 88 or an Italian Cant Z.1007 on the first night and two Ju 88s on the second. This brought their total to 8 for the campaign and 9 destroyed and one shared overall, leaving them close to “double-ace” status. For service before and during Operation Husky, Turnbull was awarded the Distinguished Flying Cross (DFC) while his enlisted observer received the Distinguished Flying Medal (DFM). Their citation is below:

As pilot and observer, Flying Officer Turnbull and Sergeant Fowler have taken part in many night operations and have destroyed five enemy aircraft. They have displayed skill and tenacity worthy of high praise. – Award effective 29 July 1943 as per London Gazette.

By the time Turnbull was rotated out of the theatre in March 1944, he and Fowler claimed a further three Ju 88s destroyed for a total of 12 aircraft destroyed and 1 aircraft shared destroyed. For destroying ten enemy aircraft Turnbull and Fowler were awarded Bars to their DFC and DFM respectively. I do not have any personal information on Flight Sergeant Fowler, but the Royal Canadian Air Force Association website notes that Flight Lieutenant Turnbull was a native of St. Thomas, Ontario. He had been a bank teller before he enlisted in Toronto in September 1940. Following his tour he returned to Canada and was a twin-engine fighter instructor. After the war he became a salesmen, first applying his trade by selling Mosquito twin-engine fighters to Nationalist China. He retired in 1981, allowing time for his passions of photography, horses, and his dog. John Howard Turnbull passed away in 1992 at 76 years of age.

John Turnbull and Cyril Fowler were just two of the thousands of airmen whose efforts made Operation Husky possible and made it as effective as it was. Significant attrition had been imposed on the Luftwaffe in a situation more favourable to Allied aircraft than that which existed over the Third Reich itself in 1943. The experiences of Turnbull, Fowler, and those of their fellow night fighter crews attest to this point. On one occasion a Mosquito night fighter crew claimed five aircraft destroyed in a single sortie. Furthermore, Benito Mussolini’s arrest on 25 July 1943 began the process of Italy’s withdrawal from the Axis camp. The Second World War was one step closer to its conclusion.